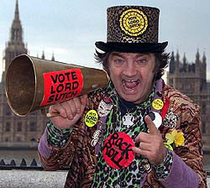 Musician and parliamentary candidate. Born David Edward Sutch in New End Hospital, Hampstead. After a less than successful pop career he turned his attention to politics, founding the Monster Raving Loony Party in 1983. In all, he contested forty elections and although never coming close to being elected, always obtained a respectable percentage of the vote. Some of his party's policies, including reducing the voting age to eighteen and all-day opening of pubs were brought into law by subsequent governments. Suffering from depression, he was found hanged at his home, 10 Parkfield Road, South Harrow.

This section lists the memorials where the subject on this page is commemorated:
Screaming Lord Sutch

Composer of the Classical period - prominent and prolific.  Born Austria as F...