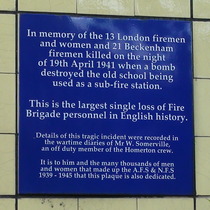 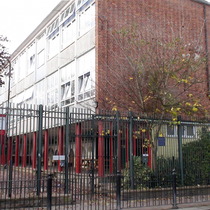 In memory of the 13 London firemen and women and 21 Beckenham firemen killed on the night of 19th April 1941 when a bomb destroyed the old school being used as a sub-fire station.

This is the largest single loss of Fire Brigade personnel in English history.

Details of this tragic incident were recorded in the wartime diaries of Mr W. Somerville, an off duty member of the Homerton crew.

The Beckenham firemen are also commemorated, and listed by name, on a plaque at Beckenham Fire Station.

2021: The great-nephew of one of the fire women killed, Winifred Alexandra Peters, has created a website dedicated to the memory of those that sadly lost their lives at the Old Palace School.

The circumstances of this bombing are described at Firemen Remembered: "Shortly after 1.30am, … crews …. were assembled in the school playground standing-by to be sent on to where they were needed most when a land-mine, one of the most violently destructive weapons at that stage of the war, landed on the roof of the school and dropped down a stairwell at the bottom of which was the watchroom where ….  two women were killed outright. The men waiting outside were caught by the blast, which also demolished two thirds of the school building, and were buried by falling masonry."

The 1943 film 'The Bells Go Down' shows new recruits joining an AFS group based at a school in the East End.

This section lists the subjects commemorated on the memorial on this page:
Old Palace School - WW2 bomb

This section lists the subjects who helped to create/erect the memorial on this page:
Old Palace School - WW2 bomb

Site of "White Hart Inn", immortalized by Shakespeare in "Henry VI" and Dicke...

The little plaque that you can see at the top of the picture is disappointing...