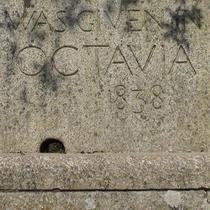 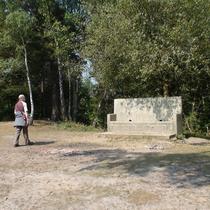 Well outside the M25, by no stretch of the rules is this in London but Octavia is a London person so we had to collect this giant seat which we came across by chance on a country walk. We decided the little mouse-holes are to allow the water to drain away from the seat.
This land is now part of the National Trust, of which Octavia was one of the founders. Also known as 'Hydon's Cup' this hill was the site of a time-signalling station (involving telescopes and a series of hills on which frameworks held large balls which were dropped). Here's a ditty about it:

This section lists the subjects commemorated on the memorial on this page:
Octavia Hill seat

Housing reformer and co-founder of The National Trust.  Born at Wisbech, Camb...