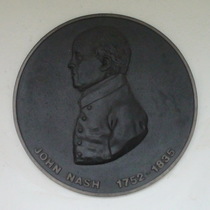 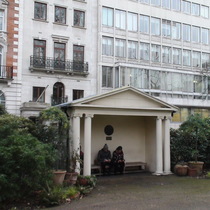 {On the plaque below the medallion:}
John Nash, 1752 - 1835, architect
He designed much of the layout of Regency London, including Regent Street and Regent's Park, and many exceptional buildings, such as the remodelling of Buckingham Palace and the Royal Mews, and relocation of Marble Arch. In St James's, his works include Carlton House Terrace, Clarence House, The Theatre Royal, and the former United Services Club, Pall Mall.

John Nash supervised the design and layout of the St James's Square gardens including this pavilion, known as the Nash Summer House.

Since they are so concerned about their copyright we'd better provide a link to the NG's page for the original of this medallion.

This plaque's reference to Marble Arch is perplexing. Nash designed Marble Arch to sit at Buckingham Palace and it was moved in 1851 to its current site. The plaque does not credit Nash with the design, only the relocation, but Nash died in 1835. Very odd.

This section lists the subjects commemorated on the memorial on this page:
Nash summer house - SW1

This section lists the subjects who helped to create/erect the memorial on this page:
Nash summer house - SW1

Caroline Martineau, born 1844.Caroline was one of the earliest teachers at Mo...