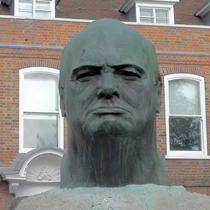 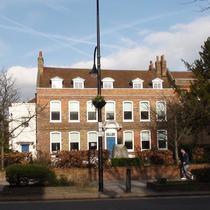 {On the front of the rough stone plinth:}
Churchill
{Inscribed on the back of the neck, to the north:}
Nineteenfortyone, The giant of England
{and to the south:}
Froni

We think the thickness of the neck has been overdone, even for Churchill. British Pathe have some very dull footage from 1966 of this bust sitting on a desk for about 5 minutes.

2019: Londonist informs that the plinth is a stone from the old Rennie Waterloo Bridge.

This early 18th century mansion, previously known as The Manor House, was used for many years as the Conservative Club. Winston Churchill was Conservative MP for the area 1924 - 1964. In 2011 the building was occupied by Allied Irish Bank.

This section lists the subjects commemorated on the memorial on this page:
Churchill - E11

This section lists the subjects who helped to create/erect the memorial on this page:
Churchill - E11

Normally both Chaucer and Caxton are shown with full beards but the facial ha...

Dickens lodged at Furnival's Inn while writing the first part of Pickwick Pap...