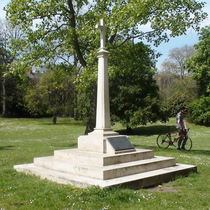 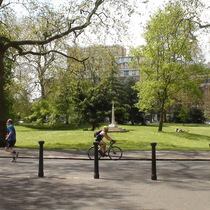 This cross was erected to the glory of God to commemorate 2000 years since the birth of Christ. It is on the site of a manor given to Saint Erkenwald, Bishop of London, by King Caedwalla of Wessex, in the 7th century, for spiritual use probably by his sister, Saint Ethelburga, Abbess of Barking.

The Batterea 'manor' at this time was an area mainly laid out as strip fields, used for farming and grazing. It remained unbuilt-up until Battersea Park was laid out 1855 - 7. We expect the manor was used to provide food, or more likely, income, to the Abbess, not a use we would describe as 'spiritual'.

This section lists the subjects commemorated on the memorial on this page:
Millennium Cross at Battersea manor

Founder and Abbess of Barking. Probably used the manor in what is now Batters...