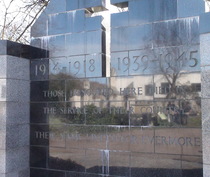 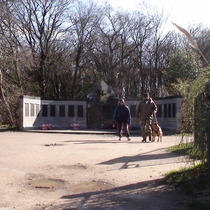 {16 bronze tablets, 8 each side, carry the list of 283 names. See Subjects commemorated for the names.}

The 4 Dutch names on the last panel are interesting. During WW2 the Dutch government in exile was based in London and there were sufficient Dutch members of the Allied forces that they needed their own club.

This memorial carries a lot of information about each name but it’s not clear what it all is, especially the numbers, so we’ve transcribed just the basic information for each name.  Other websites have transcribed more and researched some of the names: Bethnal Green War Memorials and Tower Hamlets Cemetery Park Hidden Histories Project.

These rather forbidding-looking dog emptiers politely apologised for getting in our picture!

London Gardens Online is very informative but surely not correct in suggesting that this war memorial was erected c.1950. Waymarking informs that this memorial was constructed in 2009 (that is more likely) to replace an earlier memorial which was at the centre of the park. Wish we could find a picture of that because, let us own up - we have rather taken against this memorial: it's almost brutally modern; there is too much information squeezed onto the bronze panels; the layout and the lettering on the panels has no elegance and looks as if it was designed by computer, which it probably was.

This section lists the subjects commemorated on the memorial on this page:
Tower Hamlets Cemetery Park war memorial