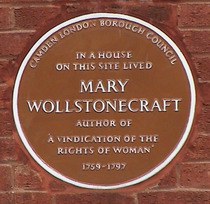 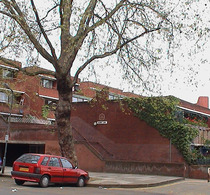 In a house on this site lived Mary Wollstonecraft, author of "A Vindication of the Rights of Woman", 1759 - 1797.
Camden London Borough Council

2019: Ann Pearson wrote questioning the absence of any reference on the plaque to William Godwin and Mary Shelley. We'll redress that omission with a summary of the short, tragic, marriage that played out in the Polygon: In early 1797 Wollstonecraft discovered she was pregnant by William Godwin so, despite their opposition to marriage, they married in March and she moved into Godwin’s home here. They both maintained independent lives with Godwin renting a daytime study nearby. Here, in August, Mary Shelley was born and 11 days later her mother died.

The address at the time was 29 Polygon Square. The current building was designed by Hungarian-born Peter Tabori who had worked under Erno Goldfinger and Denys Lasdun.

This section lists the subjects commemorated on the memorial on this page:
Mary Wollstonecraft - NW1

This section lists the subjects who helped to create/erect the memorial on this page:
Mary Wollstonecraft - NW1