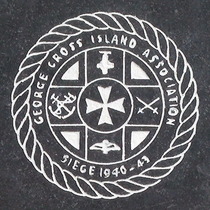 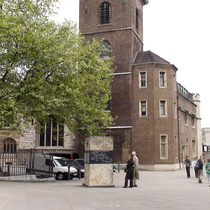 {On the south face:}
Malta G.C. The Siege of 1940-43
In 1940 the sinister shadow of Fascism spilled across Europe and into North Africa.  Malta, under the protection of Great Britain, found herself alone in a hostile Mediterranean 800 miles from her nearest allies in Gibraltar and Alexandria.  Besieged by enemies Malta became a fulcrum on which the fate of the war balanced for the next three years.  If Malta fell the rest of North Africa would follow, opening the door to the oil fields of the Middle East and for the Axis Powers to join in Asia and threaten India.  The allies knew this.  So did the Axis Powers.  Malta, besieged, became and remains the most bombed place in the history of War.

Supplied only by Sea, at great cost, Malta was defended not only by her own people but by forces drawn from the whole free world.  Fighter aircraft delivered by the American and Royal Navies were piloted by Britons, Canadians, Australians, and New Zealanders.  Convoys crewed by British, American and Commonwealth seamen were supported by the free forces of Greece, the Netherlands, and Poland.  Free Norwegians added their merchant fleet to the Allied cause.  In April 1942 King George VI awarded to the People of Malta the George Cross, the highest decoration for civilian courage and heroism.

By summer 1942 only weeks of food remained and the Allies mounted operation Pedestal as a last attempt to save Malta. After a five-day running battle the Convoy's four remaining merchant vessels and the immortal Tanker Ohio, all that was left of the fourteen that set out, entered Grand Harbour.  The date was 15th August, 1942, the feast of Santa Maria.  The siege was broken; within months North Africa was retaken and the first steps of European liberation begun.

This stone taken from Malta, was presented by the Maltese Government on the 60th Anniversary of the end of Second World War to commemorate all who participated in the siege and defence of Malta, 1940-43.

{The west face carries a map showing the “Theatre of operations of the Mediterranean Fleet”.}

{On the east face:}
{Below the royal crest and a George Cross:}
The Governor, Malta.
To honour her brave people I award the George Cross to the island fortress of Malta to bear witness to a heroism and devotion that will long be famous in history.
George RI
April 15th 1942
The citation from King George VI to the Governor of Malta

{Below an icon showing a shield with the Stars and Stripes and the Union Jack:}
“In the name of people of the United States of America I salute the island of Malta, its people and defenders, who, in the cause of freedom and justice and decency throughout the world, have rendered valourous service far and above the call of duty.  Under repeated fire from the skies, Malta stood alone but unafraid in the center of the sea, one tiny, bright flame in the darkness - - a beacon of hope for the clearer days which have come.
Malta’s bright story of human fortitude and courage will be read by posterity with wonder and gratitude through all the ages.  What was done in this island maintains the highest traditions of gallant men and women who from the beginning of time have lived and died to preserve civilization for all mankind.”
Franklin D. Roosevelt
7th December 1943
The tribute read by President Roosevelt when he visited Malta.

{The north face carries a detailed time-line of the siege which we have put in our record for that event.}

The solid block of stone for the memorial came from Gozo, one of the three inhabited islands that make up Malta. This stone was easily available in Britain after the war since it was used as ballast in the returning supply ships. The inscriptions are carried on slate panels.

EC3, Byward Street, All Hallows by the Tower

The church in the background is All Hallows by the Tower and the memorial is apparently within the grounds of the church but we cannot find the connection with Malta.  Why is the memorial here rather than anywhere else in London?  The church's website doesn't even mention Malta.

This section lists the subjects commemorated on the memorial on this page:
Malta Siege

On 15 April 1942 King George VI awarded the people of Malta the George Cross ...

This section lists the subjects who helped to create/erect the memorial on this page:
Malta Siege

From the picture source website: "The association came into being to commemor...

Bronze. The delightful dolphin spout is very similar to that at St Dunstan's....