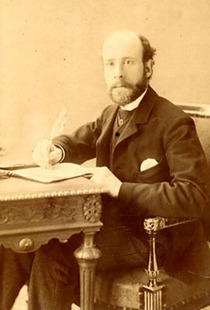 Born at 63 Pleasant Place, West Square, Lambeth. Aged 13 he became the family's sole wage-earner, as an office boy. From then on he was self-educated. Got a job as a civil servant and was a volunteer teacher in his spare time. Became superintendent of the St Anne's Sunday School in Lambeth. This led to him, with the support of local clergymen and businessmen, setting up the organisation which we now know as the Children's Society. Rudolf was also involved with the Society for the Prevention of Cruelty to Children and the  League of Nations Union. Ordained as a deacon in 1898 and as a priest in 1907. Died Eastbourne.

This section lists the memorials where the subject on this page is commemorated:
Edward de Montjoie Rudolf

Character in a series of stories set in Greyfriars School, originally publish...