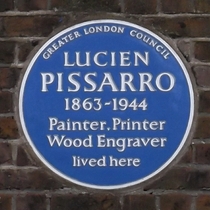 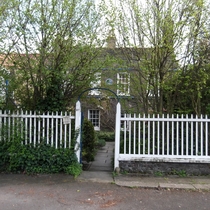 2018: The house is for sale: "A Grade II-listed, two-story house in West London that’s been owned for the last 116 years by the family of Lucien Pissarro, a renowned artist and engraver, has come onto the market for £2.95 million (US$3.95 million). Dating to 1760, the house was one of four country homes that overlooked Stamford Brook, a tributary of the River Thames. The French-born Pissarro bought the five-bedroom house in 1902 to be close to his daughter. There, he took up painting again for the first time since moving to England permanently in 1890..." "The 2,800-square-foot home, which was listed at the end of April, remains largely untouched from Pissarro’s time, retaining its original fireplaces and wood beams throughout, as well as a 7,000-square-foot garden, complete with a separate artist’s studio." "Pissarro emigrated to London in 1890 to study the work of William Morris and the Arts and Crafts movement, while lecturing at the Art Workers Guild. He suffered a stroke in 1897, which rendered him unable to paint until he moved to “The Brook” and picked up his brush again. Pissarro’s career peaked in the 1920s and ’30s, with his works being exhibited continuously at the Royal Academy from 1934 until his death in 1944."

This section lists the subjects commemorated on the memorial on this page:
Lucien Pissarro - W6

Painter, printmaker and wood engraver. Born in Paris, the eldest child of Cam...

This section lists the subjects who helped to create/erect the memorial on this page:
Lucien Pissarro - W6

{Below an image of a Victoria Cross medal:}Lance Corporal Leonard Keysor, Aus...

A supply of water by conduit from this spot was granted to the Abbey of Westm...

This market was opened on November 7th 1888 by the Right Honourable Sir Polyd...

Site of the Church of St John the Evangelist, Friday Street, destroyed in the...