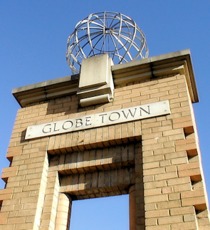 Area of London, approximately within Bethnal Green, Bow and Stepney Green. It was established to provide for the expanding population of Huguenot and Irish silk weavers. A track running north from Stepney was called Theven Lane in the Middle Ages. By the early 18th century it had been renamed Globe Lane, and later Globe Road, probably after a local inn. In the 1790s the land was developed and had become known as Globe Town by 1808.

This section lists the memorials created by the subject on this page:
Globe Town

QPR in the Community Trust

Charity. Founded to use the power of the Queen's Park Rangers football club t...