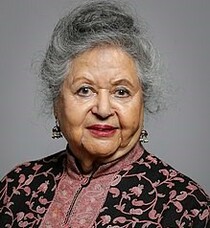 Her Wikipedia page and our Picture source gives further details about her and her elevation to a Life Peerage on 11 June 1990.

This section lists the memorials created by the subject on this page:
Baroness Flather

Roger Robinson, Cllr, and his family

Robinson is on the far left of the picture, taken in August 2005.