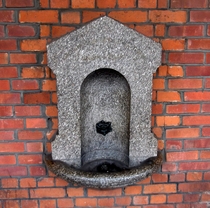 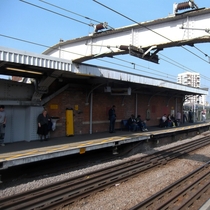 The inscription which is on marble is barely legible, so we are grateful Wikipedia for the information.

One has to wonder why a group associated with Tufnell Park, 5 or 6 miles away, is giving a drinking fountain to Limehouse Station.

2018: via Facebook Olly Houlton answered our query by providing this link to the MDFCTA which says that the fountain was originally installed in 1885 in York Road (presumably York Way) near the then cattle market. Removed by Islington Council in 1902 due to "misuse" by children it was re-erected here in 1906 by the MDFCTA in what was then Stepney railway station.

The (non-working) fountain is on platform 2, east-bound, between the two benches.

This section lists the subjects who helped to create/erect the memorial on this page:
Limehouse Station drinking fountain

We are as certain as can be, that this church in Tufnell Park Road is the St ...

This drinking fountain, manufactured in cast-iron by 'Andrew Handyside &amp; ...