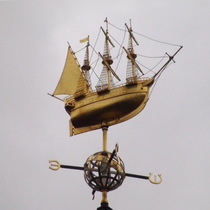 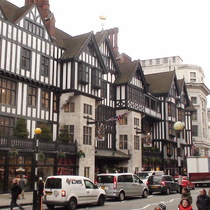 Brought to our attention by Londonist, the weather vane atop Liberty's represents the Mayflower.

Arthur Lasenby Liberty (1843 - 1917) opened his shop in Regent Street in 1875 and it rapidly expanded into neighbouring properties. As the Regency 99-year leases ended the whole of Regent Street was redeveloped with tight control exerted over the design of the buildings to ensure an impressive but harmonious whole. Liberty employed architects Edwin T. Hall and his son Edwn S.. They designed the Regent Street building in the required Imperial Edwardian style (Ornamental Passions have a page about that building) but rather let rip with the building in Great Marlborough Street which was not subject to the design rules, so they used a style very popular at the time - Tudor Revival. The timbers of two ships were used in the construction of the shop: HMS Impregnable (formerly HMS Howe) and HMS Hindustan. As far as we can see Liberty's no longer has a presence on Regent Street.

Why the Mayflower? The Tudor period is defined as Henry VII - Elizabeth I, that's 1485 -1603. The Mayflower sailed in 1620, during the reign of James I of England, so choosing that for the weathervane involved some date flexibility. Liberty's has always specialised in decorative imported goods, perhaps referenced by a ship of colonisation. We're struggling here.

This section lists the subjects commemorated on the memorial on this page:
Liberty's - weather vane - Mayflower