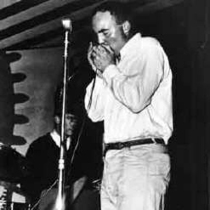 Musician. Born on 23 January 1932 at St Mildred's, 15 Hawthorn Drive, Willowbank, Denham, Buckinghamshire, he was the younger son of William Albert Davies (1898-1964) and Margaret May Davies née Jones (1903-1971). His father was a carpenter's labourer. He played in various blues and skiffle groups, whilst working as a panel beater. In 1961 he formed 'Blues Incorporated' with his friend Alexis Korner.

Our Picture source and his Wikipedia page give much information about this man.

He married Marie Elizabeth Reed, their marriage being recorded in the 4th quarter of 1953 in the Harrow registration district. Probate records confirm that he died, aged 31 years, on 7 January 1964 at the Neasden Hospital, Willesden, Middlesex, that his home address had been 34 Roxeth Grove, South Harrow, Middlesex and that when administration of his estate was granted to his widow on 2 October 1964, his effects totalled £2,366. His funeral took place at Breakspear Crematorium, Breakspear Road, Ruislip, HA4 7SJ.

This section lists the memorials where the subject on this page is commemorated:
Cyril Davies

Australian. Relocated to London in August 1984. We guess their name came from...

Conductor and violinist. Born in Bordeaux. He studied in Bruges and Brussels ...

Musician and songwriter. Part of the original line-up of the Small Faces grou...