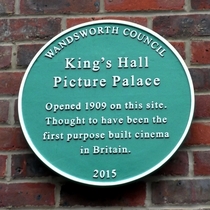 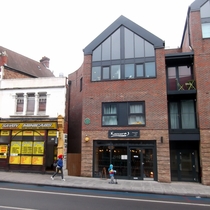 King's Hall Picture Palace opened 1909 on this site. Thought to have been the first purpose built cinema in Britain.
Wandsworth Council
2015

The erection date differs from the date on the plaque. We have found other cases where this occurs - the unveiling can get delayed for all sorts of reasons, after the plaque has been made with the planned date fixed on it.

This section lists the subjects commemorated on the memorial on this page:
King's Hall Picture Palace - first cinema in Britain

This section lists the subjects who helped to create/erect the memorial on this page:
King's Hall Picture Palace - first cinema in Britain