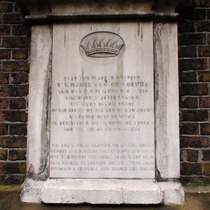 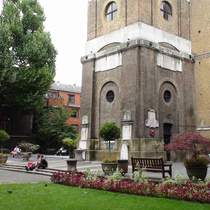 Near this place is interred Theodore King of Corsica who died in this parish Dec 11 1756, immediately after leaving the Kings Bench Prison by the benefit of the Act of Insolvency, in consequence of which he registered his Kingdom of Corsica for the use of his creditors.

The grave, great teacher, to a level brings
Heroes and beggars, galley-slaves and kings,
But Theodore this moral learn’d ere dead:
Fate poured its lessons on his living head,
Bestow’d a kingdom, and denied him bread.

The weather-worn stone above this plaque is, we guess, the original gravestone.

Perhaps someone with legal training could explain the meaning of the first paragraph, particularly how a Kingdom could be registered for the use of one's creditors. The epitaph was written by Walpole who raised a subscription to free him from prison. On his release the King went to live with a tailor in Little Chapel Street where he died.

This section lists the subjects commemorated on the memorial on this page:
King of Corsica

This section lists the subjects who helped to create/erect the memorial on this page:
King of Corsica

This section lists the other memorials at the same location as the memorial on this page:
King of Corsica