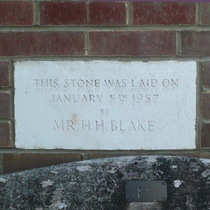 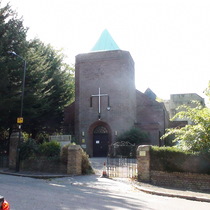 The 7 plaques are on different faces of the frontage of the building. We've numbered them left to right. Plaque 3 can be seen in our photo, just to the left of the door.

2021: The site is the subject of a proposal for redevelopment but we could see no date on the website. Consultation has a photo of the Victorian church.

The 20th Century Society informs: The architects of this 1954 building were Hastie, Winch & Kelly. The London Gardens Trust gives: "The Congregational Church was established here in 1878 and was formerly at the centre of residential terraced houses, now replaced by council blocks of the Highbury Quadrant Estate, built by the LCC in 1955/6." The National Archives inform: The site includes: a chapel, a church school; a vestry and an apartment. Some of the buildings on site in 2020 (possibly all except the church itself) are of late19th century origin.

From Streets with a Story: "The original HIGHBURY QUADRANT CONGREGATIONAL CHURCH was built in 1881 in place of an iron chapel erected on the hill in 1878, between Blackstock Road and Highbury New Park. Designed by John Sulman, it seated 1370 in 1884. The Church was restored in 1933. Vibration and war- blast had damaged the building and in 1957 a new church was re-opened and re-dedicated, seating only 250".

On the day we first visited the sun and the foliage made our task difficult. The Fleming plaque was so hidden by foliage that we only managed to read and photograph it on a second visit months latter.

2022: The Islington Tribune reported that "Government ‘rode roughshod’ over Town Hall affordable housing target by approving homes ... The building, which is currently dilapidated following a 2015 blaze, is now due to be replaced with a large new church and residential block. ... small congregation, described as “a membership of 17 members and 20 adherents” in planning documents."

This section lists the subjects commemorated on the memorial on this page:
Highbury Quadrant Congregational Church - 7 Blake

This section lists the other memorials at the same location as the memorial on this page:
Highbury Quadrant Congregational Church - 7 Blake

This stone was laid on January 5th 1957 by Rev. Peebles Fleming, Minister.

These grounds were landscaped owing to the generosity of James Clark, a membe...