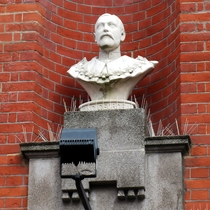 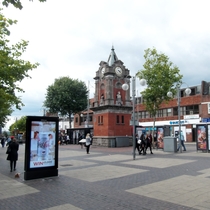 The original temporary plaster bust was unveiled at the tower's opening ceremony in 1912, but during the 1930s it started to disintegrate, and completely fell apart during cleaning in 1935. We've read that the replacement was cast by local sculptor John Ravera, who also produced the William Morris bust here and that both were unveiled 18 January 1997.

London's Screen Archives have a 3 minute film of the opening event, silent of course, but you can join in the rousing "three cheers". The centenary celebrations included a booklet: 'Changing Times: The Broadway, Bexleyheath, 1812-1912', which is very informative and shows some designs for the tower. It contained an electricity substation in the base, for the trams. On opening, of the tower's 4 niches only one was filled, with George V. Epps' speech finished with "I hope to see all the niches filled with busts of members of  the Royal Family.” The Morris bust rather ruined that plan but the Centenary celebrations included the launch of an appeal for the Elizabeth II bust.

Can any Bexleyheathians help us with a question? If what we've read about the George V bust is true, it means that the tower was totally devoid of busts from 1935 - 1997. Can any one confirm this?

This section lists the subjects commemorated on the memorial on this page:
King George V - Bexleyheath bust

This section lists the subjects who helped to create/erect the memorial on this page:
King George V - Bexleyheath bust

This section lists the other memorials at the same location as the memorial on this page:
King George V - Bexleyheath bust