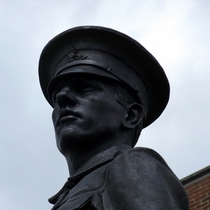 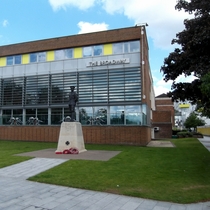 {Plaque on pavement in front of the statue, beneath the Victoria Cross:}
Driver Job Drain, Royal Field Artillery, 26th August 1914.

{Plaque at rear of plinth, beneath an illustration of the event:}
Le Cateau, France 26th August 1914
On this day, the 37th Battery, Royal Field Artillery, had lost four of their six howitzer guns in action. Driver Job Drain was one of the soldiers who volunteered to recover the last of the guns. Under intense fire and showing disregard for his own safety, he drove his team of horses within yards of the German lines, retrieving the last remaining gun thus preventing it from falling into enemy hands. For this act of bravery he received the Victoria Cross.

In memory of the sons and daughters of Barking and Dagenham who fell in the Great War.

At first sight one would think this statue was created shortly after WW1 rather than in 2009.

This section lists the subjects commemorated on the memorial on this page:
Job Drain statue

people of Barking and Dagenham lost in WW1

"Sons and daughters of Barking and Dagenham who fell in the Great War."

This section lists the subjects who helped to create/erect the memorial on this page:
Job Drain statue

Founded by Steven Hunter and Douglas Jennings. They have undertaken commissio...

Sculptor. Educated at Southwark College of Art and Design. He has produced ma...

This section lists the other memorials at the same location as the memorial on this page:
Job Drain statue

{Beneath an image of a Victoria Cross medal:} Driver Job Drain, Royal Field A...