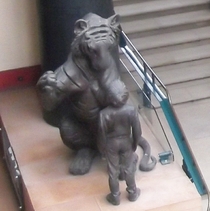 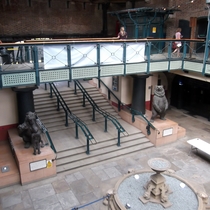 {Plaque beneath a statue of a Bengal tiger and a boy:}
In the early years of the nineteenth century a full grown Bengal tiger, having just arrived at Jamrach's Emporium, burst open his wooden transit box and quietly trotted down the road. Everybody scattered except an eight year old boy, who, having never seen such a large cat, went up to it with the intention of stroking his nose. A tap of the great soft paw stunned the boy and, picking him up by his jacket, the tiger walked down a side alley. Mr. Jamrach, having discovered the empty box, came running up and, thrusting his bare hands into the tiger's throat, forced the beast to let his captive go. The little boy was unscathed and the subdued tiger was led back to his cage.

This section lists the subjects commemorated on the memorial on this page:
Jamrach's Emporium - tiger

This section lists the other memorials at the same location as the memorial on this page:
Jamrach's Emporium - tiger

{Plaque beneath a statue of a bear} Over a hundred years ago on what was then...

{Beneath an image of a Victoria Cross medal:}Lieutenant Commander Geoffrey Dr...