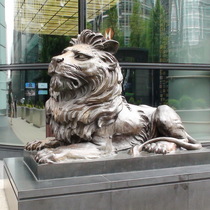 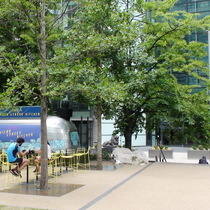 {Plaque attached to the plinth supporting the lion to the west:}
These two lion sculptures at HSBC's worldwide headquarters were cast by Bronze Age Foundry, Limehouse, London, in 2002. The lions are exact replicas of the two sculptures by W. W. Wagstaff, commissioned in 1935 for the Hong Kong office of The Hongkong and Shanghai Banking Corporation Limited. A similar pair of lions, modelled by the sculptor Henry Poole in 1923, for many years guarded the bank's Shanghai office.

This pair of lions have an interesting history - closely connected to the HSBC (Hong Kong and Shanghai Banking Company Limited) head office. Wikipedia gives them a page all to themselves.

The story starts when, inspired by the lions outside the Venetian Arsenal, Alexander Stephen, Chief Manager of the Shanghai HSBC, commissioned a pair of lions for his 1923 building. These were cast by J W Singer & Sons in England, to a design by Henry Poole, and are now in the Shanghai Municipal History Museum (with 1997 replicas outside the bank) . We found images of them here. The lions quickly became popular landmarks and were given nicknames, after managers of the Shanghai bank: Stephen is depicted roaring, Stitt quiescent.

Inspired by the Shanghai lions HSBC commissioned another pair of lions for its new 1935 headquarters in Hong Kong. These lions were by Shanghai-based William Wagstaff and were modelled on, but are not copies of the Shanghai lions. The building was rebuilt in 1985 and the lions are still on guard.

Our two lions are copies of the Hong Kong lions and were commissioned from sculptor Mark Kennedy for this 2002 HSBC Canada Square building.

The building in the background is 8 Canada Square, HSBC's London head office, and the building on which the 3 construction workers lost their lives.

This section lists the subjects who helped to create/erect the memorial on this page:
HSBC lions

This section lists the other memorials at the same location as the memorial on this page:
HSBC lions

In memory of Martin Burgess, Peter Clark and Michael Whittard, who died on 21...

The plaque is laid into the paving to the east of the fruit. Reading our phot...

The artists worked with the Rope Makers Guild to produce this image of two sk...

This memorial has its own webpage: Broadcasting House memorial. The 10 metre...