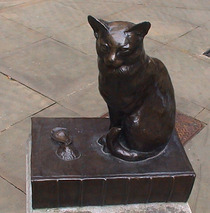 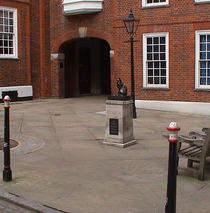 {Carved in the stone pedestal at the front:}
Hodge
{Below this is a plaque:}
Hodge, ‘a very fine cat indeed' belonging to Samuel Johnson (1709 -1784) of Gough Square.
‘Sir, when a man is tired of London he is tired of life: for there is in London all that life can afford.'
'The chief glory of every people arises from its authors.'

The efforts of Mrs Ann Pembroke, Deputy, Corporation of London representative, Dr Johnson's House Trust, are gratefully acknowledged in the ability to associate this memorial with Dr. Johnson and the English language.

{Plaque on the back of the plinth:}
‘Castigavit et emendavit'
H.W. Fowler's tribute to the work of Major Byron F. Caws in the preparation of the Concise Oxford Dictionary.

{Inscribed on a haunch:}
Jon Bickley

Hodge is sitting on a leather-bound book ("A Dictionary of the English Language", what else?) with empty oyster shells at his paws, a reference to the oysters that Johnson would go out to buy for him.

Unveiled on 26 September 1997, by the Lord Mayor of London, Sir Roger Cook. What a pity that the reference to the English language on the plaque is not contained in a more graceful and meaningful sentence.

Ann Pembroke initiated the idea of a statue of Hodge. Richard Caws provided the funds but died before its completion. The model for Hodge was Bickley's own cat. Miniatures of the statue are for sale in the museum.

For the mystery behind the Latin inscription, see Major Caws' page.

This section lists the subjects commemorated on the memorial on this page:
Hodge the Cat

Johnson described Hodge as 'a very fine cat indeed'. All the information you...

This section lists the subjects who helped to create/erect the memorial on this page:
Hodge the Cat

CVO, CBE, FRICS. Was a chartered surveyor and director of a number of compani...

Lord Mayor of London, in September 1997.

{On a nearby ornamental base:}2012 London Polo. By Huang Jian, ChinaChina is ...

He holds a copy of the Magna Carta in his right hand.