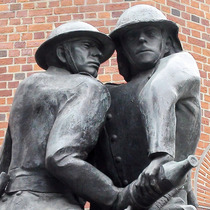 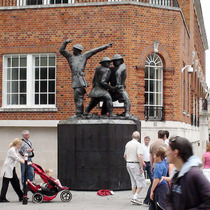 {On the southern face of the plinth:}
"Blitz" - The heroes with grimy faces - Winston Churchill
In honour and memory of those firefighters who gave their lives in the defence of the nation, 1939 - 1945.

This monument was commissioned by the founder Master of the Guild of Firefighters supported by public and service donations.
MCMXC
Sculptor = John W Mills ARCA FRBS

The United Kingdom Firefighters National Memorial
This memorial was re-dedicated and unveiled on the 16th September 2003 by HRH The Princess Royal (Patron to the Firefighters Memorial Charitable Trust).

This memorial was unveiled by Her Majesty Queen Elizabeth The Queen Mother on 4 May 1991.

{Inscribed in the rubble at the base of the statue:}
John W Mills

Two figures in the sculpture are based on a photograph, “A relief crew damping down in Cannon Street, 17th April 1941” but we cannot find it on the web.   The other figure was modelled by the sculptor’s father-in-law, Cyril Demarne, OBE, who had the initiating idea for the memorial.  The original concept was for a memorial to the 363, male, members of the London fire service who lost their lives in WW2. The idea grew to be a national WW2 memorial and then it was decided to include the women (a very late afterthought, but better late than never).   Thus the north side of the plinth carries reliefs representing women working in the Fire Brigade in WW2.  The statue was erected in 1991 on a low plinth carrying 1,027 names.

In 2003 it was decided to include all lost firefighters, not just those lost in WW2.  This required the addition of 1,192 names which meant the statue had to be raised by over a metre to provide space on the plinth for all the names.   A rededication took place in September 2003.  We have seen photos of the memorial on its original, lower plinth, and it was much more successful that then current arrangement where the statue is above people’s heads.  The list of names is updated as necessary and the total number on the plinth is over 2250.  The Firefighters Memorial Trust provides on-line access to the list of names.

Ornamental Passions has also covered this memorial and has more photos.

We have found a number of plaques erected by Firemen Remembered at sites of WW2 fires where AFS firefighters were lost.

This area was badly damaged by fire on the night of 29 December 1940 and the area between St Paul's Churchyard and Carter Lane was not rebuilt. Sermon Lane doesn't appear on many maps but this is the name of the walkway leading from St Pauls to the Millennium Bridge.

This section lists the subjects commemorated on the memorial on this page:
National Firefighters memorial

firefighters who died in Britain fighting fires (in WW2)

This section lists the subjects who helped to create/erect the memorial on this page:
National Firefighters memorial

Founding Master of the Worshipful Company of Firefighters.  Buckingham Covers...