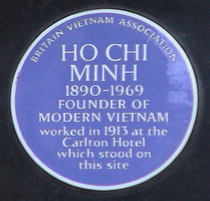 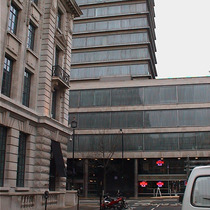 Britain Vietnam Association
Ho Chi Minh, 1890-1969, founder of modern Vietnam, worked in 1913 at the Carlton Hotel which stood on this site.

Wikipedia questions the veracity of this plaque, while acknowledging that Ho was in London between 1913 and 1919, living in West Ealing and Crouch End.

This building (1959-63 by RMJM London architects) is listed. The following information was added to the listing in 2013: "An elegant tower and podium composition, it has significance as the first major office tower in central London, the first to be fully air conditioned and the first to be fully glazed on all sides. It also includes specifically listed artwork: the sculptor Inia te Wiata's life sized tribal figures of Maoris."

This section lists the subjects commemorated on the memorial on this page:
Ho Chi Minh

Designed by C. J. Phipps. The picture is taken from Cockspur Street. Compare ...

Communist revolutionary and founder of modern Vietnam. Left Vietnam in 1911 a...

This section lists the subjects who helped to create/erect the memorial on this page:
Ho Chi Minh

This non-political, non-commercial association is now known as the Mekong Clu...