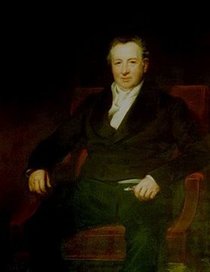 In 1792 Charles Gould (1726 – 1806), lawyer and politician, married Jane Morgan and in 1792 inherited her family’s property in Tredegar, Wales. At the same time he changed his name to Morgan and was made a baronet. Succeeded by his son of the same name (1760-1846) who became the second baronet. The son (in our image) served in the army for a time but in 1792 (when his father inherited) he resigned, also changed his name to Morgan and became a politician.

We don’t know when this Stepney Estate was acquired but it was the second baronet who developed it, in the 1820s – 1840s.

This section lists the memorials where the subject on this page is commemorated:
Sir Charles Morgan

25-26 Tredegar Square Part of the grand north terrace of the square completed...

In 1961 Mayor of Clichy, France, and Vice-President of the General Council of...