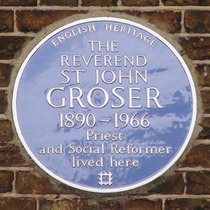 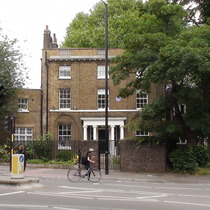 These listed buildings are now used by the Royal Foundation of St. Katharine.  Up until the bombs of 7 September 1940 there was a church here, St James Ratcliff, probably behind this building, and this building, a nice Georgian manor house, was the vicarage. The Foundation took over the house and the ruined church in 1948. The house became the Master’s House and, according to the usually impeccable AIM25: "In 1951 the parish was united to Saint Paul's, Shadwell ... and the ruins taken down. The site was added to a public garden which had already been laid out in the old graveyard."

However old maps show the church being behind the Vicarage, to the east, rather than beside it to the south, where the garden now is. And the Foundation's website says "the Foundation moved on to the site of St. James Ratcliff, which had been blitzed and was not to be rebuilt." and "New accommodation was also built for conferences and retreats, forming a villa shaped complex with the Chapel and Old Vicarage." This describes the buildings that can be seen in satellite view, behind the Old Vicarage. So we think in this instance AIM25 have got it wrong.

The modern chapel contains many historic items from the original St Katharine's church and sounds worth a visit. The Foundation offers hotel accommodation but we can't see that it is ever open to the public. Please let us know if you've visited the chapel.

This section lists the subjects commemorated on the memorial on this page:
Rev. St John Groser

Priest and social reformer.  Born Australia to parents who were there as miss...

This section lists the subjects who helped to create/erect the memorial on this page:
Rev. St John Groser