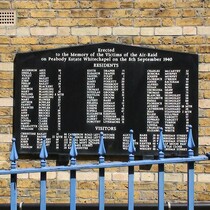 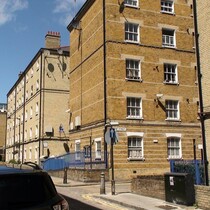 {See Subjects commemorated for the names.}

Both lists gives the age of each person and, for the visitors, their home address. Of the 64 adults, 42 are female, reflecting the fact that many men were away serving in the forces. 14 children died. Transcribing this list it is impossible not to conjure up, for example, Alice and Philip Bailey and 4-year old John welcoming Philip's sister-in-law, Christine, bringing baby Jean to visit. They were all killed but perhaps there were other young cousins who survived, orphaned - and Jean's father - he probably heard the dreadful news while serving overseas.

From the Survey of London we learn that this 1880-1 Peabody Estate was the first of the Metropolitan Board of Works' slum-clearance projects to be taken forward. At the time John Fisher Street was named Glasshouse Street. Block L, this block, was built later in 1920, to a slightly higher standard. "Block K on the west side of Glasshouse Street was destroyed in the Blitz, on 8 September 1940, killing seventy-eight people, most of whom were in the block’s air-raid shelter. ... The site of K Block remained empty save for car parking until 2012–14 when Peabody erected a residential block on the site that it named Darbishire Place." This is the modern building immediately opposite the plaque, outside and to the left of our photo.

This section lists the subjects commemorated on the memorial on this page:
Peabody WW2 memorial

In Elizabethan times, a favourite spot for archery contests.Edward Lear, 1812...