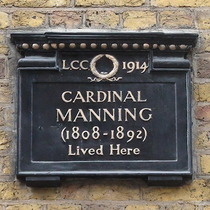 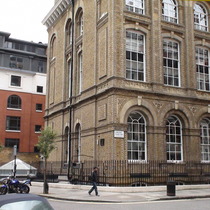 We were interested to find a drawing of this memorial in the 1915 book 'Memorials and Monuments' by Lawrence Weaver, where we learn that the material is lead. The erection date on the plaque shown in that drawing is '1913', not '1914', which suggests it was delayed for some reason. Given all that was happening in that period it is surprising that anyone was erecting plaques to cardinals that had died over 20 years previous.

From Westminster's Conservation Area Audit : "Manning House is a stock-brick palazzo built c.1867 as the Guardsmen's Institute by H. A. Darbishire. It exhibits typically 1860s eclectic detailing and is nine bays and three and a half tall storeys, with openings round-arched below and above, and segmental between. The building served as the Archbishop of Westminster's Palace 1873-1901 and was reconstructed for offices in the 1960s by Rolfe Judd, a slate mansard added with sash dormers in line with bays below."

This section lists the subjects commemorated on the memorial on this page:
Cardinal Manning

This section lists the subjects who helped to create/erect the memorial on this page:
Cardinal Manning

{Above the London Underground roundel:}In remembrance of the fifty six people...