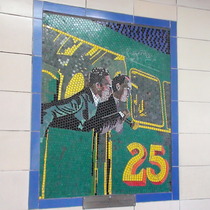 Number 17, 1932
Jewel thieves Brant and Sheldrake – played by Donald Calthrop and Garry Marsh – attempt a getaway to the coast on a stolen train, moments before their high speed chase ends in disaster.

“A lot of movies are about life, mine are like a slice of cake”. – Alfred Hitchcock.

This section lists the subjects commemorated on the memorial on this page:
Hitchcock mosaics 05 - Number 17, 1932

This section lists the other memorials at the same location as the memorial on this page:
Hitchcock mosaics 05 - Number 17, 1932