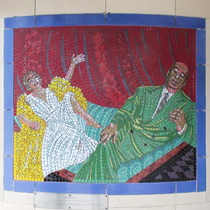 Hitchcock and Dietrich Marlene Dietrich, star of his 1950 thriller Stage Fright, relaxes with Hitchcock off set.

This section lists the subjects commemorated on the memorial on this page:
Hitchcock mosaics 02 - Hitchcock and Dietrich

This section lists the other memorials at the same location as the memorial on this page:
Hitchcock mosaics 02 - Hitchcock and Dietrich