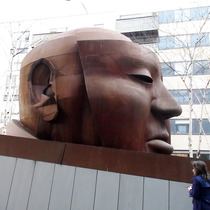 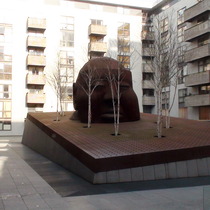 {The only inscription we could find is on an artistically rusting plaque just behind the woman in our photo which contains an alphabetical list of 36 names. Since this is preceded with "With thanks"we have taken them to be the funders - see 'Created by' for the names. At the end of this list is "A Do" presumably referring to the sculptor, Antony Donaldson.}

There is no plaque to explain that Hitchcock is represented here because this was the site of Gainsborough Studios where many of his British films were made.  The art-work is a fine example of a Section 106 agreement whereby developers agree to do something in return for planning permission from the Council.  This one read "... the provision of £200,000 for environmental improvements to Shoreditch Park and an appropriate amount to pay for an art feature to commemorate the historic use of the studios for film making".  The platform through which Hitch pokes his head is actually the roof of an office, with windows and a door on the elevation behind the bust.

This section lists the subjects commemorated on the memorial on this page:
Hitchcock bust

This section lists the subjects who helped to create/erect the memorial on this page:
Hitchcock bust