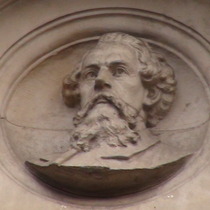 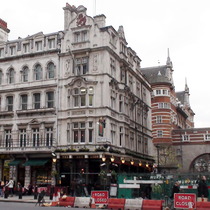 This section lists the subjects commemorated on the memorial on this page:
Dickens bust - SW1

This section lists the other memorials at the same location as the memorial on this page:
Dickens bust - SW1

First installed on Marylebone Road, vandalism caused this bust to be removed ...

We think this visage probably represents an ancient sage, probably Greek or R...