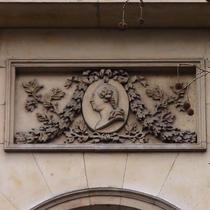 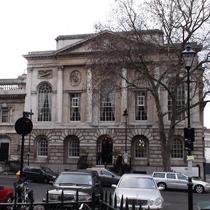 Above the central window, this cameo-type profile bust of the King is draped in ribbons and swags of oak and laurel leaves. Carved by Rossi and Locatelli to designs by Nollekens.

Built in 1779, designed by Thomas Rogers. The panels on the façade are all carved by Joseph Nollekens. In the 19th century this building was "swapped" with a building at Parliament Square which became the Middlesex Guildhall. As ever, Ornamental Passions has an excellent entry on this building.

The 1952 film 'I Believe in You' uses the exterior of this building as the courthouse at the centre of the lives of probation officers and their charges, but it had ceased its legal function in 1921.

2017: Caroline's Miscellany gives a full history of the building.

This section lists the subjects commemorated on the memorial on this page:
Old Middlesex Sessions House

This section lists the subjects who helped to create/erect the memorial on this page:
Old Middlesex Sessions House

Sculptor. Born and died in London, son of a Flemish painter.