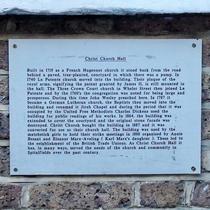 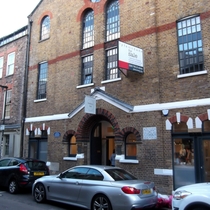 Christ Church Hall
Built in 1719 as a French Hugeonot {sic} church it stood back from the road behind a paved, tree-planted, courtyard in which there was a pump. In 1740 La Patente church moved into the building. Their plaque of the royal arms, signifying the patent granted by James II, is still mounted in the hall. The Three Crown Court church in Wheler {sic} Street then joined La Patente and by the 1760's the congregation was noted for being large and prosperous. During this time John Wesley preached here. In 1787 it became a German Lutheran church, the Baptists then moved into the building and renamed it Jireh Chapel and during the period that it was occupied by the United Free Methodists. Charles Dickens used the building for public readings of his works. In 1864, the building was extended to cover the courtyard and the original stone facade was destroyed. Christ Church bought the building in 1887 and it was converted for use as their church hall. The building was used by the matchstick girls to hold their strike meetings in 1888 organised by Annie Besant and Eleanor Marx-Aveling (Karl Marx's daughter). These led to the establishment of the British Trade Unions. As Christ Church Hall it has, in many ways, served the needs of the church and community in Spitalfields over the past century.

Below the oval blue plaque there is a foundation stone:
This stone was laid by Mr William Forster - superintendant
C. Mc.I North - Archt.
August 1864

The white plaque used to be just to the right of the foundation stone, under the windowsill. This plaque was removed when the building was renovated in 2015. It emerged with two new memorials: the tiles and the blue oval. We thank our colleague Alan for these photos.

The pavement plaque is immediately outside the entrance.

From Spitalfields Life:"The Hanbury Hall in Hanbury St was built in 1719 as a Huguenot Church, standing back from the road behind a courtyard with a pump. The building was extended in 1864 and is now the church hall for Christ Church, Spitalfields."

This section lists the subjects commemorated on the memorial on this page:
Hanbury Hall - white plaque - removed

Occupied the building until sometime between 1818 and 1828.

This section lists the other memorials at the same location as the memorial on this page:
Hanbury Hall - white plaque - removed