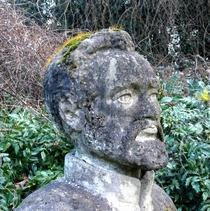 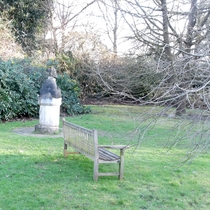 {Inscription on the plinth:}
The Emperor Haile Selassie, who visited Wimbledon when he took refuge in this country in 1936.
Made and presented by Hilda Seligman

The bust was originally located in the garden of Lincoln House, Parkside, the home of its sculptor Hilda Seligman and her husband Dr Richard Seligman, and where Selassie was given refuge in 1936 (possibly just for a few days) before he moved on to Bath. We can't pin down the exact location of this house, described as a mansion, but it was presumably near what is now Lincoln Road.

The house was demolished in 1957, and the bust moved to Cannizaro Park, initially in the "rose garden beside Camp Road. In the 1980s it was transferred again to its present position in the former Tennis Garden amid rhododendrons behind the aviary." Over the years it deteriorated badly and was restored and re-unveiled in 2005. 2017, it already looks in need of attention again.

Getty Images have a photo of Selassie at Lincoln House. Our source is mainly the Wimbledon Guardian.

Cannizaro Park is a delightful gem which we came across purely by chance. It is a remnant of the gardens of a former country house. The name comes from Francis Platamone, a Sicilian who leased the house for many years and eventually inherited the title of Duke of Cannizzaro (sic).

2020 July: The BBC reported that this memorial has been destroyed. "It appears to be linked to unrest in Ethiopia sparked after a popular singer, Hachalu Hundessa, was shot dead earlier this week."

This section lists the subjects commemorated on the memorial on this page:
Haile Selassie

This section lists the subjects who helped to create/erect the memorial on this page:
Haile Selassie

This is clearly a portrait of a historical figure but with no inscription we ...