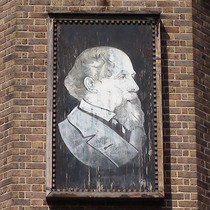 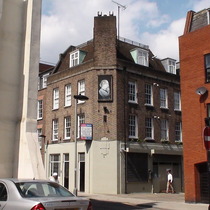 Until about 1936 the address was 12 Little James Street and up until at least 1944 the pub was the 'White Lion'. In fact the only evidence we can find of this pub's other name is this sign and the "Dickens Inn" marked on GoogleMaps which suggests it was recent and short-lived. But we like the sign so we are including it. This site is close to Dickens' home in Doughty Street so he probably visited the pub, indeed which London pubs did he not visit?

This section lists the subjects commemorated on the memorial on this page:
Charles Dickens pub

Margaret Mellor, born 1933.As a Waterloo resident Margaret has worked for the...

High up on a narrow street, this is the best photo we could manage. Her Maj. ...