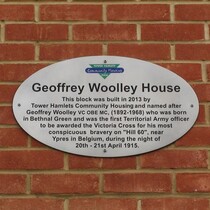 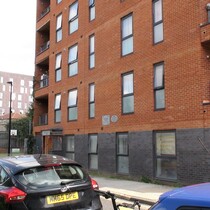 Geoffrey Woolley House
This block was built in 2013 by Tower Hamlets Community Housing and named after Geoffrey Woolley VC, OBE, MC, (1892-1968) who was born in Bethnal Green and was the first Territorial Army officer to be awarded the Victoria Cross for his most conspicuous bravery on "Hill 60", near Ypres in Belgium, during the night of 20th - 21st April 1915.
Tower Hamlets Community Housing THCH

This section lists the subjects commemorated on the memorial on this page:
Geoffrey Woolley - E2

This section lists the subjects who helped to create/erect the memorial on this page:
Geoffrey Woolley - E2

THCH is a charitable housing provider managing over 3,000 homes exclusively i...

The Corporation of the City of LondonSite of the French Protestant Church, de...