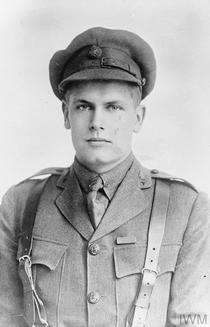 Born St Peter’s Vicarage in Bethnal Green, as Geoffrey Harold Woolley, the vicar’s son. The first British Territorial Army officer to be awarded the Victoria Cross. He was serving with the London Regiment and captured Hill 60 in the Ypres Salient on the night of 20th -21st April 1915. Survived WW1 and returned to his studies, becoming ordained and working as a vicar until he retired. Died at home in Sussex.

Looking for Woolley's birth place, St Peter's Vicarage, we found St Peter's Bethnal Green Church & Vicarage Gardens so we'd guess the vicarage was one of the buildings around the Gardens.

This section lists the memorials where the subject on this page is commemorated:
Second Lieutenant Geoffrey Woolley VC

Geoffrey Woolley House This block was built in 2013 by Tower Hamlets Communit...

{Below an image of a Victoria Cross medal:} Second Lieutenant Geoffrey Woolle...