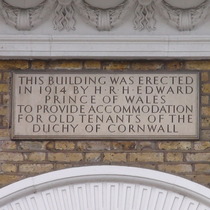 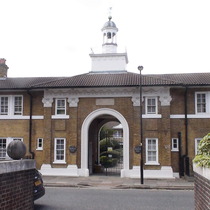 This building was erected in 1914 by HRH Edward Prince of Wales to provide accommodation for old tenants of the Duchy of Cornwall.

These building are just a small part of the Duchy of Cornwall's Manor of Kennington. Wikimapia has a map showing the extent. It was laid out in the early 20th Century to a high standard. Woodstock Court was designed by Stanley Davenport Adshead and Stanley Churchill Ramsay in 1914.

This section lists the subjects commemorated on the memorial on this page:
Duchy of Cornwall almshouses

Something like a company, which invests mainly in land (mostly in the south-w...

Kirkaldy Testing WorksThis building was built in 1874 for David Kirkaldy (182...