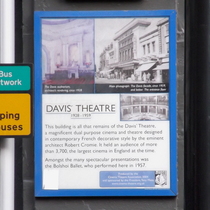 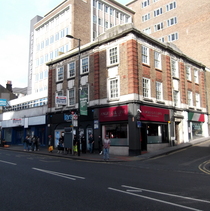 {Beneath photographs of the theatre:}
Davis' Theatre 1928 - 1959. This building is all that remains of the Davis' Theatre, a magnificent dual purpose cinema and theatre designed in contemporary French decorative style by the eminent architect Robert Cromie. It held an audience of more than 3,700, the largest cinema in England at the time. Amongst the many spectacular presentations was the Bolshoi Ballet who performed here in 1957.
Produced by the Cinema Theatre Association 2004 and sponsored by the President, Tony Moss.
www.cinema-theatre.org.uk

Google Street View shows this plaque in situ 2008 - 2014 but lost by June 2015. We have the Russian Embassy to thank for drawing this loss to our attention.

This section lists the subjects commemorated on the memorial on this page:
Davis' Theatre

This section lists the subjects who helped to create/erect the memorial on this page:
Davis' Theatre

Kent HouseTo commemorate the opening of this Estate by Her Royal Highness the...

{Below an image of a Victoria Cross medal:}Second Lieutenant Dennis Hewitt, H...