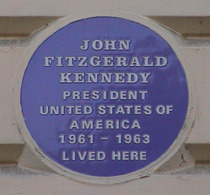 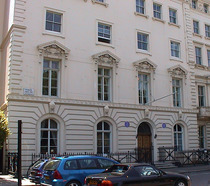 Credit for this entry to:
Bob Baker, Nigel Hall

The building used to be the residence for the United States Ambassador to the Court of St James's (i.e. Britain) a post held, 1938 - 1940, by Joe Kennedy, Sr, JFK's father. While there Joe supported appeasement to the extent that he was recalled for fear of his Nazi sympathies. JFK was aged 21 - 23 and spent much of the time touring Europe but he certainly spent some time here with his father.

Kennedy plaque to the right, Morgan's to the left. The Royal College of General Practitioners has a good page on the history of 13-14. In 1921 Morgan gave the property to the US Government as a home for the American Ambassador. It was remodelled internally and the distinctive native American keystones were added.

This section lists the subjects commemorated on the memorial on this page:
John F Kennedy - Princes Gate

This section lists the other memorials at the same location as the memorial on this page:
John F Kennedy - Princes Gate