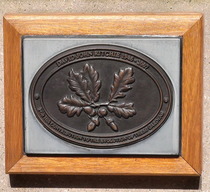 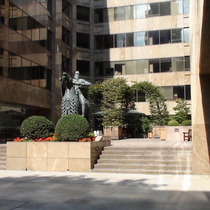 [Around a relief of an oak branch:}
David John Ritchie 1946 - 2007
For his contribution to the evolution of these gardens.

From London Gardens Online: "Cutlers Gardens, now renamed Devonshire Sq. is an office development with generous landscaping on the historic site of East India Company Warehouses ... The knights gave up the land when the Holy Trinity Priory was founded at Aldgate in 1108, and the monks used part of the site for their convent garden." More on this sculpture and the history of the area at London Details.

The knights' land is now known as Portsoken, one of 25 wards in the City of London.

At Waymarking we read that "The statue used to be mounted in the centre of the large square on a slowly revolving turntable. It has now been moved to a fixed location a little aside."

2017: This horse just won't stand still. Londonist reports that it has moved from Cutlers Gardens, where we photographed it, to the west end of Devonshire Square, so we moved our pin there.

This section lists the subjects commemorated on the memorial on this page:
David Ritchie

This section lists the other memorials at the same location as the memorial on this page:
David Ritchie

The plaque with this text utilizes an unusually interesting script, reminisce...

We believe that the crown and the 'B' are indicative of the Bedford Estates a...