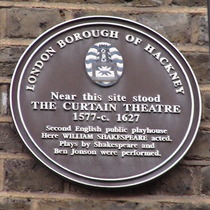 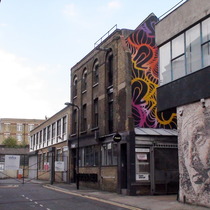 June 2012 a Museum of London archeological dig discovered the Curtain Theatre. July 2013 Londonist reported on the plan for the site which involve the display of the remains, a modern theatrical space and, oh, surprise, a tower block - a 40-storey skyscraper. June 2016: The building and plaque have gone. Some great archeology.

This section lists the subjects commemorated on the memorial on this page:
Curtain Theatre - Hewett Street

This, the second English purpose-built playhouse was erected very close to th...

This section lists the subjects who helped to create/erect the memorial on this page:
Curtain Theatre - Hewett Street

The plaque contains an error - the theatre was actually the Princess Theatre ...