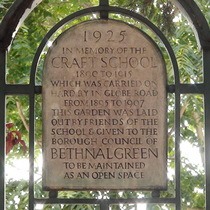 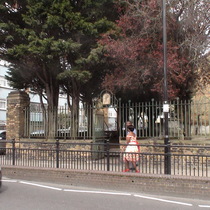 The west, road, side of this plaque carries a relief, by Winifred Turner, showing a bearded blind man being guided by a child - see photo at Derelict London - but it has not weathered well. The other face has fared much better with this nice hand-crafted lettering in a good, plump, typeface, by Lucy Sampson.

From Edith's Streets: "Globe Road Wesleyan Chapel, now demolished, was opened in 1819 and later taken over by Dr. T.B. Stephenson of Children's Home as a mission hall named after General Gordon. It was sold to the Salvation Army in 1959. Its burial ground was once known as Mile End Cemetery’"

From London Gardens Online: "Globe Road Open Space is a remnant of the former graveyard of Globe Road Wesleyan Chapel. The site was acquired by the Craft School, which occupied the neighbouring building, and it was laid out as a memorial garden in 1926, many of its features the work of craftsmen. ... the entrance gate overthrow has a bronze plaque depicting 'The Blind Beggar of Bethnal Green'."

London's Hidden Burial Grounds has an 1839 news item about the "indecent disinterment" of bodies in this, the Globe Field burial ground.

This section of the railway line was built 1836-9 and it's possible that the burial ground used to extend around to the southern side of the chapel, where the lines now are. The 1828 Greenwood map shows a 'school' behind the chapel.

Disused Stations informs that, from 1884, immediately behind this site and stretching as far as Morpeth Street there was a railway station: 'Globe Road and Devonshire Street Station'. The Globe Road entrance was immediately south of the bridge, with a booking office in the first railway arch. The station remained largely intact until demolition in 1938. The three brick piers at the pavement edge are all that remain.

Maps show the 'Mission Hall' remained all through this upheaval. And at Disused Stations we found 1931 aerial photos showing the Mission Hall and smaller buildings behind (possible the 'school' shown on 1828 map). Also see a London Inheritance. The buildings behind look very similar to what is still there. The large building currently on site is on the same footprint as that shown in 1931 but is perhaps not quite as tall, and on the garden elevation one can see in the old brickwork that the windows have been reduced in size. The Mission Hall in the 1931 photos had a Victorian-ornate frontage. We think the current building could be the original chapel (or more likely a later Victorian replacement), but re-roofed and with all its ornamentation removed or covered up.

The Memorial Garden was opened on 10 July 1926. It commemorates the 25 years of the Craft School in the East End. Friends of the School chose this burial ground which was at the time run-down. They acquired the ground, had it laid out as a garden and arranged for Bethnal Green Council to maintain it. The garden was ornamented by craftsmen connected with the School or associated institutions. F. W. Troup designed and supervised the works, which include a flower bowl by Mary Watts' Potters Guild. The flagstones came from the Bank of England which was being reconstructed at the time. The costs of the garden were partly covered by the funds remaining once the Craft School was closed.

Concerning the modern street scene: The pig-pen railings that you can see in the photo extend up to the nearby junction, around all four corners, meaning that pedestrians wishing to cross the road have to go out of their way, while the motor traffic sails on by. Clearly some, fit, pedestrians had taken to jumping over. This is evidenced by the serrated metal edging added to the top of the railings at the junction. When the railings are removed and the traffic slowed so people can cross safely - that will be a sign that civilisation is arriving in this corner of London. End of rant.

This section lists the subjects commemorated on the memorial on this page:
Craft School - Globe Road

We have found some very interesting information about this School. It grew ou...

This section lists the subjects who helped to create/erect the memorial on this page:
Craft School - Globe Road

Studied at the Central School of Arts and Crafts.

August 2019: We were informed by Ste Ríkharðsson via Facebook that the plaque...

This was the Queen's last official appearance. Via Londonist we found this V&...