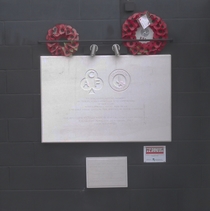 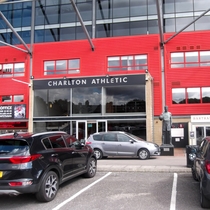 {Main plaque, beneath the Charlton Athletic Football Club badges:}
To the everlasting memory of the players, officials and supporters of our club who left all that was dear and lost their lives in the service of their country.

'The boys left to take part in the greater games overseas.'
Charlton Athletic handbook 1927
Lest we forget

{The label beneath the main plaque informs that the plaques were donated by the Charlton Athletic Museum.}

The 1927 description of WW1 as 'the greater games overseas' seems strange to us today.

2021: We thank Clive Harris of the historical team at the Charlton Athletic Museum who wrote as follows: "For context, and I hope it is useful, the quote is a direct one from the meeting in 1915 when the club decided at a special meeting to withdraw from football immediately and 'go and fight the greater game overseas'."

This section lists the subjects commemorated on the memorial on this page:
Charlton Athletic F.C. war memorials

Former official at Charlton Athletic F.C.. Killed on the Somme whilst serving...

This section lists the subjects who helped to create/erect the memorial on this page:
Charlton Athletic F.C. war memorials

This section lists the other memorials at the same location as the memorial on this page:
Charlton Athletic F.C. war memorials

Unveiled by Simon Callow who has never worked on a Leigh movie though he and ...