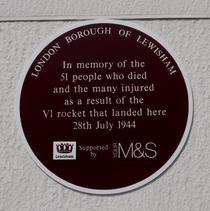 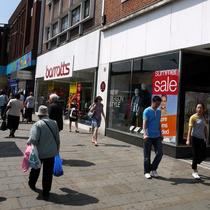 London Borough of Lewisham
In memory of the 51 people who died and the many injured as a result of the V1 rocket that landed here, 28th July 1944, Lewisham supported by your M&S.

Plaque unveiled by Heidi Alexander, M.P. for Lewisham East, and Councillor Alan Smith, Deputy Mayor of Lewisham. A brass plaque commemorating this event was placed on the pavement, but had become badly worn over the years.

This section lists the subjects commemorated on the memorial on this page:
Lewisham V1 rocket attack

This section lists the subjects who helped to create/erect the memorial on this page:
Lewisham V1 rocket attack

Retail group specialising in clothing and food, founded by Michael Marks and ...

This section lists the other memorials at the same location as the memorial on this page:
Lewisham V1 rocket attack

This brass plaque on the pavement had become badly worn and a new one was ere...