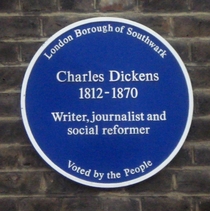 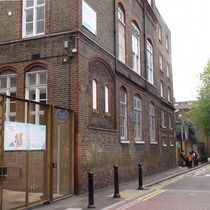 In 1824, aged 12, Dickens lodged in Lant Street in a house belonging to the Vestry Clerk of St George's Church - we take this to mean St George the Martyr, opposite Borough Station. At the time Dickens senior was confined to the nearby Marshalsea debtors' prison and was joined there by his wife and the younger children. Charles was working in a blacking factory to bring some funds into the family.

The plaque is irritatingly silent on why it has been placed on this precise spot, but perhaps, even with the Vestry connection, it's not known exactly where in the street Dickens lived - after all he was only 12, and only here for a few months.

The building has some other, architectural, plaques which read:
School Board for London
Lant Street School 1877
SLB Lant St. School enlarged 1901

This section lists the subjects commemorated on the memorial on this page:
Charles Dickens - SE1

This section lists the subjects who helped to create/erect the memorial on this page:
Charles Dickens - SE1

This section lists the other memorials at the same location as the memorial on this page:
Charles Dickens - SE1

On the wall high above the plaque is the school shield. The scroll below the...

This green was named by the worshipful the Mayor of Redbridge Councillor Lind...