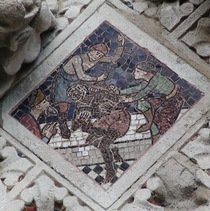 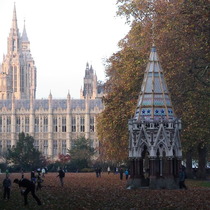 {Plaque on the river side of the monument:}
This plaque commemorates the 150th anniversary of the Anti-Slavery Society, 1839 - 1989.

{Plaque on the other side:}
Erected in 1865 by Charles Buxton MP in commemoration of the Emancipation of Slaves 1834 and in memory of his father Sir T. Fowell Buxton and those associated with him, Wilberforce, Clarkson, Macaulay, Brougham, Dr Lushington and others.

Due to strong shadows it was only on our fourth visit that we managed to take a good photo of this important mosaic. High up on the edifice there are 16 of these lozenge mosaics; all the others showing generic scenes of animals etc. but this one image is chillingly appropriate.

This section lists the subjects commemorated on the memorial on this page:
Buxton Memorial Fountain

Born in Edinburgh. Died in Cannes, France, where, despite the plaque in Graft...

This section lists the subjects who helped to create/erect the memorial on this page:
Buxton Memorial Fountain

This section lists the other memorials at the same location as the memorial on this page:
Buxton Memorial Fountain